Marriage is not a simple concept. Far from it. You probably know that too well. It is one of those “things” that evolves (continually) and over time and is far more like an adventure than just a destination. If we think of it as a destination (a fixed image) we will be miserable. It is an adventure but no adventure is the same. Marriage is therefore a very hard thing to pin down. To illustrate that point here are a few facts that help show the breadth of what marriage is:

A marriage ceremony typically ends with a kiss because in ancient Rome, a kiss was a legal bond that sealed contracts, and marriage was seen as a contract

There are approximately 61.5 million married couples in the USA.

It wasn’t until 1840, when Queen Victoria wed Prince Albert in a white bridal gown, that the “chaste” color became the status quo.

In 1228, Scotland was the first European country where women earned the right to propose marriage, a law which then spread throughout Europe.

The term “tie the knot” comes from the pre-Biblical tradition of “handfasting,” during which betrothed couples would join hands—his right to her right, his left to her left—in front of witnesses, signifying the couple is married for a year and a day. After the allotted time passed, they could then renew permanently or pledge themselves to each other for another year and a day, ad infinitum.

Wedding and engagement rings have been worn on the fourth finger of the left hand since ancient times. The Romans believed a vein in this particular finger, called “vena amoris” (a.k.a. the “vein of love”), leads directly to the heart.

Longest marriage: The world’s record for the longest marriage goes to Herbert and Zelmyra Fisher, who were married 86 years, 9 months, and 16 days as of February 27, 2011. Sadly, that is when Herbert passed away; he was 106 years old.

Most expensive wedding: Sheikh Mohammed bin Zayed bin Sultan Al Nahyan, the crown prince of Abu Dhabi and his bride Princess Salama hold the world’s record for the most expensive wedding, which was held in 1981. The prince’s father ordered a custom-made stadium to be built for the 20,000 + guests that were to attend, and at the wedding, 50 Arab and African song-and-dance troupes paraded before the princes, emirs, sheiks and ambassadors who had been flown in on 34 private jets. In total, the extravaganza had a price tag of $100 million.

The record: Oldest couple to marry – aggregate age. senior French couple found love again and sealed it with a wedding held at a rest home in the year 2002. What set their marriage apart was that the couple had a combined age of 190 years 126 days. The bride, Madeleine Francineau, at that time was aged 94 years and 201 days, while the groom, Francois Frenandez, was 96 years and 290 day old. 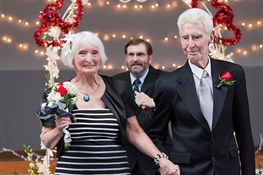 The record: Most wedding guests. In a show of lavishness, J. Jayalalitha, chief minister of the Indian state of Tamil Nadu, hosted a wedding for her son, V.N. Sudhakaran, to N. Sathyalakshmi, a former movie star. What set the wedding apart from the rest was the number of guests who attended the luncheon: a staggering 150,000.