OK, so Marriage is sometimes “serious” business. We all agree on that. It can be exhausting some days. Yet in the midst of figuring the marriage-stuff out, it is ok to switch off all the “heavy stuff” and try to see that there is a lighter side to marriage too. We forget that most days.

This is a starter list of “silly things” (to set the mood) but what we REALLY want to build up is a list of “Embarrassing Marriage Stories” that our visitors submit so that others can smile too. If you have an “embarrassing marriage story” (that you don’t mind sharing) just use the contact form here.

So…until we have a list of fresh input from our visitors…here are a few silly marriage quips:

My son asked me what it’s like to be married so I told him to leave me alone and when he did I asked him why he was ignoring me.

I accidentally handed my wife a glue stick instead of a chapstick. She still isn’t talking to me.

Two antennas met on a roof, fell in love and got married. The ceremony wasn’t much, but the reception was excellent.

I asked my wife what she wanted for Christmas. She told me “Nothing would make her happier than a diamond necklace” So I bought her nothing

My wife just found out I replaced our bed with a trampoline; she hit the roof.

I just asked my husband if he remembers what today is… Scaring men is easy.

More marriages might survive if the partners realized that sometimes the better comes after the worse. – Doug Larson

My wife and I have the secret to making a marriage last. Two times a week, we go to a nice restaurant, a little wine, good food. She goes on tuesdays, I go Fridays. – Henry Youngman

The woman who married the Eiffel Tower 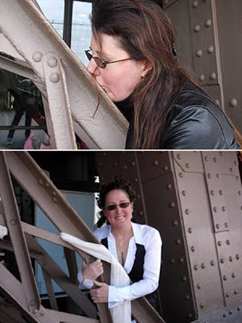 Erika La Tour Eiffel, 37, a former soldier who lives in San Francisco, has been in love with objects before. Her first infatuation was with Lance, a bow that helped her to become a world-class archer, she is fond of the Berlin Wall and she claims to have a physical relationship with a piece of fence she keeps in her bedroom. But it is the Eiffel Tower she has pledged to love, honour and obey in an intimate ceremony attended by a handful of friends. She has changed her name legally to reflect the bond.

The man who married himself 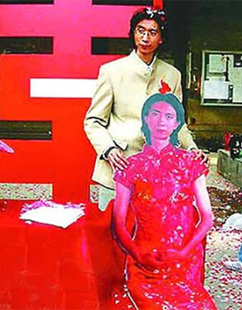 Liu Ye ,39 years old, from Zhuhai city, China, has married himself in front of more than 100 guests at a traditional courtyard. He, and the foam cut-out of himself in a red bridal dress, were attended by one bridesmaid and one groomsman. On the way out he bowed to the ancestors and to senior guests in return for blessings. Lui denies being gay but says he could be “a bit narcissistic” according to local media reports. “There are many reasons for marrying myself, but mainly to express my dissatisfaction with reality,” Lui said. “This marriage makes me whole again. My definition of marriage is different from others.”

The man who married a pillow 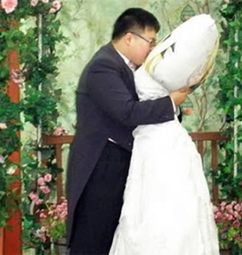 True love can take many forms. In this case, it has taken the form of a Korean man falling in love with, and eventually marrying, a large pillow with a picture of a woman on it. Lee Jin-gyu fell for his ‘dakimakura’ – a kind of large, huggable pillow from Japan, often with a picture of a popular anime character printed on the side. In Lee’s case, his beloved pillow has an image of Fate Testarossa, from the ‘magical girl’ anime series Mahou Shoujo Lyrical Nanoha. Now the 28-year-old otaku (a Japanese term that roughly translates to somewhere between ‘obsessive’ and ‘nerd’) has wed the pillow in a special ceremony, after fitting it out with a wedding dress for the service in front of a local priest. Their nuptials were eagerly chronicled by the local media.”